This Is About That

Suddenly, it occurred to me. This isn’t about how much time they spend at her parent’s house. This was about something else. Negotiating a compromise wasn’t helping.

There are different levels to what couples fight about. Sometimes, the real issues aren’t the surface issues. 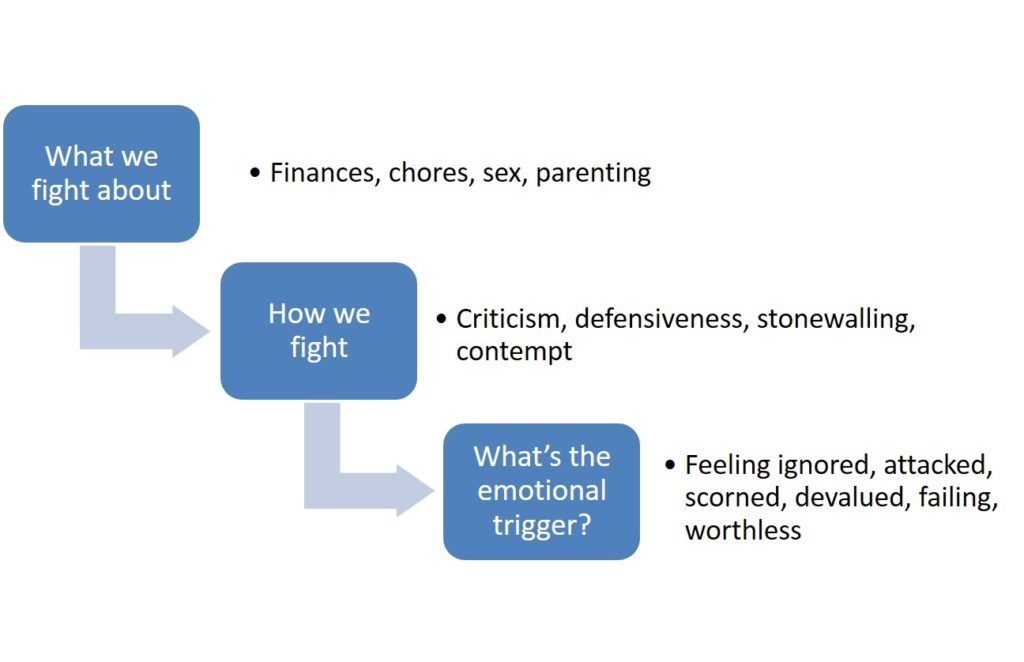 Level One: What We Fight About

Couples fight about all kinds of topics: finances, chores, sex, parenting, etc. All of us do this. What causes the most trouble isn’t the topic we are fighting about, but something much deeper.

The couple that was fighting about how much time to spend at her parent’s house wasn’t about that. As mentors, if we focus on resolving these issues, we may not get to what’s really happening.

Level Two: How We Fight

If you haven’t read any of John Gottman’s books, please do so. He is one of the best known marriage researchers in the world. One way that he studied relationships was by putting couples in a “love lab” or an apartment and watching their interactions. He identified what he calls the Four Horseman of the Apocalypse: criticism, defensiveness, contempt and stonewalling.

This is all about how we fight. These patterns happen over and over again, regardless of the topic of the disagreement. These behaviors tear down the marriage bond.

Marriage education can help a couple to identify how they use these behaviors and the effect that is has on their relationship.

Have you ever just lost it? Have you reacted to something in a way that doesn’t make sense? Someone says something or does something that triggers something inside of you.

I know I have. I used to invalidate Michelle’s feelings. When she would get emotional, something inside of me clicked and I responded with logic. That was my way of dealing with emotions – ignore them and put on an analytical grid. My reaction was something that I learned in my childhood. If you would have confronted me, I would have responded with a logical argument about why what Michelle was doing didn’t make sense. Not exactly responding in love, right?

When I learned the impact on Michelle of my actions, it helped me to think about emotions differently. This is part of what I needed to change in order to validate and to show love to Michelle.

As you are mentoring couples, recognize that what you are hearing may not be what it is really about. Be aware that there may be different levels to any given argument.

Often, these are things that are deep within us. They may be from our childhood.

Mentoring in the Church

I believe that the church has a huge opportunity to impact the lives of couples. Many couples wait too long to seek professional help, if at all. Part of my mission is to equip lay people.

However, I value mental health professionals. As a lay person, I know that some of the emotional triggers aren’t easily solved. Some of these are much deeper issues and will require a professional to help people to work through them. Often, marriage education and therapy go hand-in-hand. If you are in doubt, refer the couple to a professional.

Other posts in this series on relationship complexities that mentors will see:

A Behavior, by Itself, Isn’t That Harmful

You Don’t Understand the Impact

There Are Multiple Behaviors to Change