The Obsession Cycle After Infidelity

Obsession: Part of Healing from Infidelity

My wife and I were sitting across from Mark and Lisa and listening to their pain. Lisa just admitted that she had an affair. Mark was devastated and in shock. Over the weeks that followed, they continued to meet with us to process their emotions.

You don’t have to be in marriage ministry for very long before infidelity will come up. The statistics are a bit staggering.  Some studies have suggested that up to 50-65% of husbands and 45-55% of wives have had an affair by the time they are 40.

I don’t want to get caught up in the statistics, but I do know that this comes up frequently. My wife, Michelle, and I regularly meet with Christian couples that have affairs. We’ve even seen it with couples in their first year of marriage.

If you’re new to mentoring, especially distressed couples, know that you’re going to hear this. It can feel a little overwhelming.

I want you, as mentors, to recognize two very common cycles: the obsession cycle and the depression cycle.

One of the best books about affairs is by Dave Carder, a pastor and licensed therapist. It’s called “Torn Asunder: Recovering from an Extramarital Affair.” In his book he outlines two very common emotional cycles that couples go through.

It helps us, as mentors, to understand what couples are going through. It can also help the couple to know that these are common and normal. 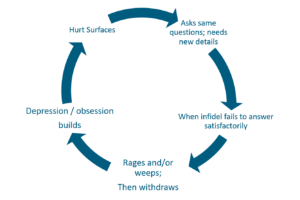 Mark kept asking Lisa over and over again about the events of the affair. It seemed like he couldn’t get enough information. He would ask very detailed questions about what happened. He’d think about it and then come back and ask even more questions.

Mark was caught in the obsession cycle.

There is a tendency for the betrayed person to feel that more information will somehow help with the pain.

While it’s very normal, if it goes on too long it can stop the betrayed person from processing their own hurt and contribution to the affair.

When Mark met with us and I could see that he was caught up in the cycle, I validated his feelings.

“It sounds like you’re really hurt and this has become an obsession with you.”

Mark nodded. I explained that this obsessing was normal.

When this continued in other sessions, I asked him if the need for details was helping or hurting him. He didn’t know what to say. He kept going back to one particular detail. I responded, “It sounds like the thought of that is really hurting you. But, if you knew the answer, would it really change anything? Would it help you to process your anger and grief?”

I said, “I know that you need to process your hurt. I want you to process it, but eventually the obsession has to be put away. Will that question really help you to heal? If you knew the answer, would it help you to get over your anger and your grief?”

I also suggested that he keep a journal and express all of his feelings in it. Write down your anger. Write down your grief. As time goes by, you can read back and see how you’ve changed. It helps to get it out.

Be sure to check out part two of this post on the Depression Cycle. I’ll be posting it later this week.